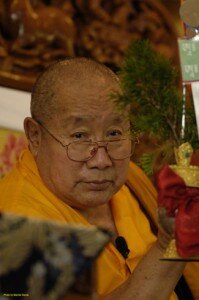 The 11th Throneholder of the Palyul Lineage of the Nyingma School of Tibetan Buddhism, His Holiness Penor Rinpoche, entered the final stage of meditation and paranirvana at 8:20 PM on Friday, March 27, 2009, at Palyul Namdroling Monastery in Bylakuppe, South India.

His Holiness Pema Norbu (Penor) Rinpoche was the 11th Throneholder of the Palyul Lineage of the Nyingma tradition and founder of Namdroling Monastery in Bylakuppe. India. He was considered one of the of the foremost masters of theBuddhist tradition of Tibet. Throughout the Buddhist community he was respected for his vast knowledge and accomplishment and for the integrity and strength with which he upheld the Buddhist teachings.

Three versions are available for the Prayer for the Swift Rebirth of His Holiness Penor Rinpoche.

His Holiness the 14th Dalai Lama wrote a Swift Rebirth Prayer on the 25th Day of the Third Month in the Lunar Calendar (19 May, 2009) 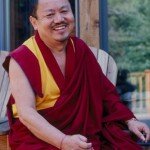 jhi sid bhar du shab pe ten gyur chig
And may your lotus feet be firm for as long as an eon!

PEMA GESAR DONGPO LA
On the pistil of a lotus flower

Go To: Near the bottom of page on http://www.palyul.org/eng_teachings.htm

“It is said that the twelve syllables Om Ah Hum Vajra Guru Padma Siddhi Hum carry the entire blessing of the twelve types of teaching taught by Buddha, which are the essence of His Eighty-four Thousand Dharmas. Therefore to recite the Vajra guru mantra once is the equivalent to the blessing of reciting…..or practicing the whole teaching of the Buddha.

The wisdom mind of Padmasambhava is manifested in the form of the mantra; these twelve syllables are actually the emanation of His wisdom mind, and they are endowed with His entire blessing. The vajra guru mantra is Padmasambhava in the form of sound. So when you invoke Him with the recitation of the twelve syllables, the blessing and merit you obtain is tremendous. In these difficult times, just as there is no Buddha or refuge we can call upon who is more powerful than Padmasambhava, so there is no mantra that is more fitting than the Vajra Guru Mantra.” 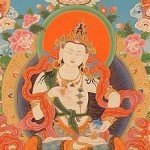 About the 100 Syllable Mantra

As with any mantra there are many levels to the meaning of the 100 Syllable Mantra. As a result, one should not become fixated upon any one translation of the mantra. For example, each of the syllables in the 100-Syllable Mantra also represents the One Hundred Peaceful and Wrathful Deities resident in one’s own body and encountered in the Bardo State after death. By practicing with an open mind, the deeper levels of the mantra will be revealed.

The approximate meaning of the mantra: You, Vajrasattva, have generated the holy mind (bodhicitta) according to your pledge (samaya). Your holy mind is enriched with the simultaneous holy actions of releasing transmigratory beings from samsara (the circling, suffering aggregates). Whatever happens in my life-happiness or suffering, good or bad-with a pleased, holy mind, never give up but please guide me. Please stabilize all happiness, including the happiness of the upper realms, actualize all actions and sublime and common realizations, and please make the glory of the five wisdoms abide in my heart.

Filed Under: Prayers and Mantras