Tibetan Buddhist Meditation and Study in the Nyingma Tradition

Amateur videos of Losar 2007 at Namdroling, India have been posted at YouTube and Stickam.
Visit http://www.palyul.org/broadcast.htm and lhttp://www.youtube.com/profile?user=Palyul to find links to these videos.
May All Beings Benefit! His Holiness Penor Rinpoche will confer the Kalachakra Empowerment at the Palyul Retreat Center in the United States.
This is only the second time he has conferred this Empowerment in the United States.
His Holiness Penor Rinpoche and group of monks will carry through the teachings and practices for Kalachakra this year.
This ceremony, which focuses on World Peace, can be attended by all, no matter what religion.
For more information, visit http://www.kalachakra2007.com Registration opened Jan 15, 2007.

Just like its sister retreat at Namdroling in India, the U.S. courses are lead by HH Penor Rinpoche and include
Ngondrö, Tsa Lung/Tummo, and Dzogchen Tögyal and Trekchö.
This is an unparalleled opportunity to received teachings from a master who has realized them
with clear commentaries from highly-trained Palyul Khenpos.
Please visit: http://retreat.palyul.org for more info.

At Lerab Ling, His Holiness Penor Rinpoche will bestow the transmission of Nyingthik Yabshyi,
the most important cycle of empowerments associated with the Nyingma and Dzogchen teachings,
and the most crucial for students to receive to follow the path of Dzogpachenpo.
He will also bestow several other empowerments, including Rigdzin Düpa and Yumka Dechen Gyalmo.
For more information, visit: http://www.lerabling.org The one-month retreat is in progress at Namdroling Monastery,
lead by HH Penor Rinpoche. This retreat includes teachings for Ngondro, Tsa Lung, and Dzogchen.
(A similar retreat is offered in the United States July 10 - August 10).
Khenpo Wangchuk Sonam is offering the Lung of the Nyingthik Yabshi during this period as well.
On the fifth day of the second month (March 23) a longlife ceremony for HH Penor Rinpoche will commence.
This ceremony will conclude on the tenth day, Guru Rinpoche day.

Friday, March 23 to Thursday, March 29 (3/22 - 3/28 in the Western Hemisphere)
Accumulations to be offered at the Closing Ceremony in Namdroling, India
on Guru Rinpoche Day, Second Month, 11th Day

March 24, 2007 from Palyul Ling International:
Dear Friends,
We wanted to let you al know that the following prayers were recited for the long life of His Holiness Penor Rinpoche:
214,132 7-Line Prayer
12,505,542 Vajra Guru Mantra
Thank you to all that participated. Participants spanned the globe and included the following countries:
Australia, Bhutan, Bulgaria, Canada, Germany, Greece, Kerala State/India, Philippines, Portugal, Singapore, Taiwan and the USA.
If you are still participating, please take moment to report your pledge/accumulations to: [email protected]
May all beings benefit! Every year, Namdroling Monastery in Bylakuppe, India holds the traditional one-month retreat for Ngondro, Tsa Lung, and Dzogchen. This year's retreat will commence on the 17 or 18th day of the first Tibetan month. If you would like to attend the retreat at the Monastery, a permit is required. Please click here for more info.

The same retreat is offered in the United States every year from July 10 to August 10. Please visit http://retreat.palyul.org/retreat_overview.htm for information and details.

Visit http://retreat.palyul.org for details based on 2005 schedule.

Ngondro, Tsa Lung, and Dzogchen. If you missed this year's retreat and are interested in the teachings,

Teaching by His Holiness Penor Rinpoche

The Attitude to Take for Overcoming Natural Disasters

The present world is modernized and it is very easy for countries to communicate with each other. This has good -- and bad -- results.  Everyone tells their own history and tries to explain events their way, according to internal political or religious pressures.  At the same time, many religions exist in this world, as well as many qualified teachers.  Anyone who is truly following their religion is thinking about how to solve the problems of this world.  Meanwhile, most of the previously realized teachers have already shown us how to solve these problems for all of the beings in the universe.

But the times are now degenerating.  Some of those following these religions and some who follow certain politics have gotten used to thinking and acting in a negative way.  So it will not make a difference whether an individual is a good person or a bad person; we will be caused to suffer from difficulties because of our collective negative thoughts and actions.  Of all these negative thoughts and actions, selfishness will create more difficulty than anything else.

That is why all the different kinds of religions are based on the benefit of all sentient beings and not focused on selfishness -- no matter what religion.  Religions are for the benefit of peace and compassion for sentient beings, especially in the case of Buddhism.  For us, we take vows to be helpful for all beings, without exception.  We pray that we will not even use the space of one hair in a selfish way.

We already see that bad karma has the result of causing suffering.  So then, of course, if we behave in a positive way, there will be benefit and fruition.   If everyone -- no matter Buddhist or not, whether black or white -- prays and wishes for the same things, for happiness and peace on earth, then definitely things can be solved in a positive way.

Floods are the result of an imbalanced water element.  There are also imbalances in the earth [such as earthquakes], fire [volcanoes] and air [tornados, typhoons and hurricanes].  If we are all living in harmony in the world, then naturally the elements will be balanced.  Once harmonious, no imbalances will arise.  [Tr. note: Rinpoche is referring to the example of sentient beings held like the objects in the pot of the elements.  Once the inside is in balance, the pot will also be in balance].

When problems arise, like the Tsunami in Asia, or the flood in the United States, I personally feel very sad.  It is physically hard to do anything to help.

We Tibetans also have recently faced so many problems.  For example, for us, Guru Rinpoche and so many high lamas predicted we would encounter the problems we have met.  They told us the method and how to solve the problems. But, because of degenerating times, collectively many of us had difficulty believing these predictions, which are hundreds, and sometimes thousands of years old.  Because we collectively had difficulty believing in the truth, this came to be a difficult time for the Tibetans.  Then, when the result came about, many people said, "Oh, we really made a big mistake."  And a few even said, "Of course this was going to happen because we did not believe this prediction and follow the instructions."

So for us Tibetans, when we suffered, we suffered almost like a physical hell. Even still, we never gave up belief in the Three Jewels [Buddha, Dharma and Sangha].

All of these problems are the gathering of karma.  [They are the consequences of our previous actions].  There is not anything to rejoice in or to regret because these are not one or two people's results, but all people's results.  [Known as gathering or collective karma; Tib: Chin Thun].  Because of our past lifetimes in which we accumulated negative karma collectively, we must all collectively suffer the results.  These results cannot be suffered by just one or two people.

We know that in the future we don't want this kind of suffering.  So it doesn't matter what religion or color, we can build the positive collective karma together by loving each other and having compassion towards all sentient beings. This will make things better in the future so the positive result will come from the positive attitude.

May the Guru remain in the world for a long time to come, may the light of His teachings pervade the sky of mind and bring happiness to all. We requested this teaching on the attitude to take in the cases of natural disasters from the compassionate one, Kyabje Drubwang Pema Norbu Rinpoche (Penor Rinpoche), who responded to our request with enthusiasm. The teaching was translated by Lama Lobsang Chophel and took place on September 4, 2005. May these efforts serve to awaken the absolute reality of Guru Padmasambhava in the hearts of all beings. Namdroling Monastery, India: His Holiness the Dalai Lama granted the inauguration blessing of the new temple to Guru Rinpoche, Zangdokpelri, at Namdroling. Because the new temple has less room, the main ceremony was then moved to the Golden Temple where over 12,000 monks gathered including those from Namdroling, the Sera Monastery, and three major Gelugpa Monasteries, Kagyu Monastery and others. The kitchen estimated 16,000 meals were served at lunch including 1,000 outside visitors, 1,000 Indian guests and 2,000 local lay Tibetans. The three-day celebrations follow each afternoon with a Tsog Offering sponsored by the students from overseas. (His Holiness the Dalai Lama is teaching morning sessions at Sera Monastery on Asanga's Jangsa (Bodhisattava Spiritual Levels/Bodhisattava Bhumi) and Maitreya's Do De Gyan (Ornament of Sutra/Sutra Alamkara) until the 7th day of the 11th month (December 18)).

Zangdokpelri Temple was built on the site of the original temple in the Namdroling complex. The original temple's statues were preserved during demolition because of the numbers of great masters who blessed them. This includes masters such as HH Dilgo Khyentse Rinpoche, Nyoshul Khen Rinpoche and many, many others.

A great deal of hand painted detailing is in evidence throughout the temple. Featured here is hand work on the exterior (above) and a close up of the rainbow adornment from the temple roof (below), featuring figures of the sky-going Dakas and Dakinis.

The bottom floor interior features all the traditional paintings telling the life story of Guru Rinpoche and Yeshe Tsogyal. Details on consecration and inauguration celebrations to come! 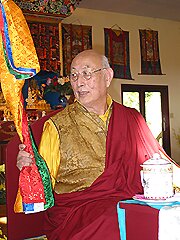 By special request of His Holiness Penor Rinpoche, Thubten Palzang Rinpoche attended and taught at the entire

Palyul retreat  from August 25 to September 25, 2004. Thubten Palzang Rinpoche is His Holiness Penor

Rinpoche's classmate. This was a rare chance for students to receive teachings from this authentic and precious

master, who has only visited outside of Tibet on two other occasions. It is unknown if such a trip will ever be repeated.

Thubten Palzang was born in the year of the Fire Rat (1936). He was discovered by the great Khenpo Ngaga

Thubten Palzang Rinpoche was a younger classmate and special friend of His Holiness, along with

Dzongnang Rinpoche. The three young tulkus studied and practiced under the direct guidance of Khenpo Ngaga

and received teachings and empowerments  from many realized masters.

Among these, he received the Rinchen Ter Dzod (Precious Terma Treasury) from Chogtrul Rinpoche

and the Dam Ngang Dzod (Treasury of Essential Instruction), the Do Wang Drangtsi Chu Gyun

From Lungtog Rinpoche, he received all the Longchen Nyingthig empowerments and oral transmission

and many other empowerments and transmissions.

Free from the stain of partiality, Thubten Palzang's activities are like a great ocean of enlightened

conduct for the benefit of the teachings and all sentient beings. He has overseen the rebuilding of the

region, serving as His Holiness Penor Rinpoche's surrogate for the granting of teachings and

empowerments. He is renowned for his mastery of the detailed instructions of all the ritual activities

such as the mudra (hand gestures) and cham (lama dance). This was his first trip to the West.

August 11, 2003 The three "Heart Sons" of His Holiness Penor Rinpoche arrived in New York the week of

August 10, called there by His Holiness Penor Rinpoche. Coming all the way from Kham (Tibet) for the

with His Holiness at the Upstate US Center. Already at the center were Chonjur Rinpoche and Ogyen Rinpoche, who attended the 2003 US Summer Retreat. © Copyright 2003-2008 All rights reserved. Please do not reproduce without prior written permission.